A Desire for Something More

From the moment of arrival in Łódź on July 15 for MAGIS, pilgrims were immersed in dancing, singing, meeting new friends, and discovering God and themselves.

And the experience is already having an impact. Claire Dixon, who says that she desired to experience the universality of the church after being “confined to my bubble in California,” has been struck by the experience of shared prayer. “Hearing the other pilgrims pray the Our Father using so many different tongues made my heart so full of joy and wonder. This is how I imagine it all began on Pentecost,” she says. 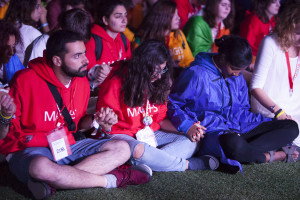 Portuguese participant Madalena Machete was similarly moved by the first few days of MAGIS and the chance to meet people from different cultural contexts. “I believe that the understanding that our faith is global is very important nowadays,” she says. “Sometimes I forget that there are places where being a Catholic is much more difficult than in my country.”

After spending the weekend together in Łódź, the roughly 2,000 participants have now been split up into different Ignatian experiment groups of about 25 people.

Living, praying, and collaborating in groups of people from up to four different continents — and at least as many languages — offers the continued chance to gain new perspectives. 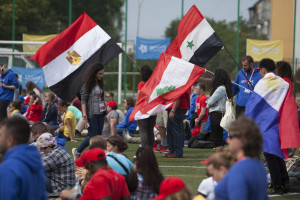 “I did not realize how I take for granted that people can understand me — until I tried to speak French for the first time in 20 years with a pilgrim from Paris,” says Cathy Dante from the United States. “I was so relieved when I could speak English again! I could understand and be understood. That is my desire as I go into the experiment — to be understood and to understand.”

Many pilgrims expressed a desire to discover each other — and together experience Christ. “I feel like this experience is an opportunity to learn about other cultures and young people who, like me, experience the living Christ and good news in their different contexts,” says Jorge Gomez from Ecuador. “Despite speaking different languages, there is a common language: Ignatian spirituality and the love of God.”

Ignatian spirituality is an element of MAGIS that already unites this diverse group of participants, and pilgrims have the opportunity to go deeper in this spirituality throughout the experience. 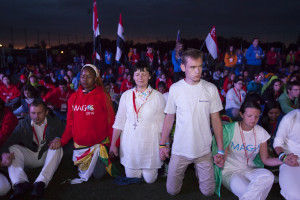 Each day, pilgrims will participate in a MAGIS Circle, an opportunity for reflection on one’s day. “As someone who goes to a Jesuit university, I’ve loved learning more and more about Ignatian spirituality and I think that the MAGIS Circle will be another great activity that can be added to my prayer toolbox,” says Kate Hannick from the U.S.

From the diversity of perspectives, one truth becomes apparent: much growth awaits the pilgrims — and their communities as a result. “I hope to reignite a passion for God’s love and for God’s people and put that passion into action when I get home,” says Christopher Dollesin from the United States.

As summed up by Karl Gebrael, Near East: “It’s the taste of Magis that drives us to ask for more of it.”