July 16, 2016 — Jesuit Father Tomasz Kot, former provincial of the northern Poland province and current assistant to Jesuit Father Adolfo Nicolás, Superior General of the Society of Jesus, answered questions from participants at MAGIS 2016 Saturday morning on the Father General’s behalf. Fr. Nicolás was required to remain in Rome instead of attending MAGIS as previously planned due to health concerns.

Delegations were drawn from a hat at the opening ceremony the previous evening, and those selected sent representatives to ask Fr. Kot questions on stage. Pilgrims from Poland, Italy, Cambodia, Australia, Spain, Malaysia and Singapore, Portugal, Slovenia, Taiwan, and Slovakia were brought up one at a time in front of the entire MAGIS audience — some proudly cloaked in their nations’ flags, some not, but all honored by the opportunity. 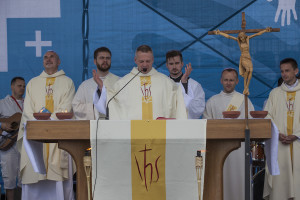 When a pilgrim from Slovenia asked Fr. Kot to describe a moment that brought him closer to God, Fr. Kot mentioned a time in his early priesthood where he heard a confession from a young woman. “I don’t even remember her face, but I remember how beautiful she was because she met God. … If you look for it in your life, you can find people discovering how God has worked in their lives. If it’s a really authentic experience, it touches you so deeply that you can’t forget it,” he said.

Fr. Kot encouraged pilgrims to rise to the challenge of maintaining a positive Catholic identity in an increasingly secular world. “If you are a person that really brings something new or gives hope, I think people are going to question why you do this, and then you can tell them your story, your faith,” he said.

He acknowledged the difficulty of being religious in the midst of anti-religious sentiment. “Keep in touch with other young people as you do here at MAGIS to feel like you’re not alone,” he advised.

“Sometimes people don’t like religious stuff because for them it’s connected to violence or a kind of separation, even terrorism,” he said, in light of recent terrorism in Turkey and France. “I think the best answer to this is to work to change this perception of religion, a very good point for interreligious dialogue.”

The Q&A session was followed by a Mass. According to his office, Fr. Nicolás was initially scheduled to watch only part of the livestream of the Mass at MAGIS due to other obligations, but was so moved by the pilgrims that he made time to watch the entire Mass. A special icon of the Black Madonna, Our Lady at Czestochowa, was brought on stage, which Fr. Kot referenced in his homily, calling pilgrims to “be Jesus’ mother.”

“Whenever we are seeking the will of God and we do it … we can give birth to Jesus in our times, in our countries, in the contexts we are living in,” he explained. “The Virgin Mary did it first, but soon the apostles, the very first generation of the church, understood that every generation can experience this grace of giving birth to Jesus. You are this woman, Jesus’ mother … when you seek God’s will and put it into practice.”

Fr. Kot called on pilgrims to celebrate and be happy, as they have traveled to MAGIS and World Youth Day to do. “The situation in the world does not offer much space for joy. There are wars … unemployment touching young people … lack of meaning, hope, and even joy itself. And yet God tells us to sing and rejoice.”

Watch the livestream of major events at MAGIS 2016 on the MAGIS Poland YouTube channel here.