Back Together, Closer to God and Others

Pilgrims closed their experiments today, and shortly before departing to Czestochowa, they took the time to reflect on all the fruits their MAGIS experiments offered.

There was unanimous agreement among the pilgrim reporters that they had received grace in abundance, in many forms.

They spoke of the gifts of cooperation, discovery of self, appreciation of silence, understanding of diversity, profound friendships and finding God in all these things.

They gave without counting the cost, and were pricelessly rewarded. They hoped to carry these blessings home and spread them to their families, their communities and the world. 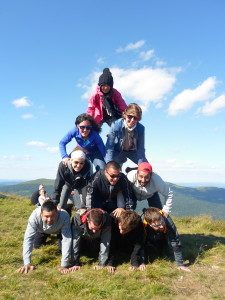 “At the beginning of this experiment I was afraid of many things — not being able to communicate, make friends, or contribute. But my fears were never realized because I feel accepted,” said Cornelius Astana, from Indonesia. “I had thought it would be the most challenging part of MAGIS 2016. But I was wrong. The biggest challenge is what I can do for others after my MAGIS experiment.”

Close quarters and simple accommodations called for pilgrims to internalize consideration of others in new ways. “For me, the most important thing I have learned here is the ability for us to walk in the same direction, if it is God who is orchestrating the scene,” said María Barra Burillo, from Spain. “We cooperate without realizing it and move like a single organism. Imagine 30 strangers, sharing one shower, but with no problem making a schedule.”

Added Stephanie Mangion, from Malta, “We are not alone in this life and I know now for a fact that I cannot always do things on my own.”

Jorge Gomez, from Ecuador, acknowledged the deep passion for others that transcended the constraints of limited communication and time spent together over only six days of the experiments. “MAGIS is an experience that unites us young people throughout the world in our diversity through one language: love.”

“Love is the most essential language in the world,” agreed Silvia Ťapáková, from Slovakia, who was especially moved by the Syrian pilgrims’ efforts to communicate with those living in a Polish nursing home. “The pilgrims didn’t understand anything in Polish. However, these elderly people had everything that they wanted and needed. At our last meeting with them, tears were a proof of their and our pleasure.”

Bethany Hojnowski, from the United States, will remember most the happiness found in all things MAGIS: “The biggest seed planted in my heart is joy; joy from friendship, joy from dancing, and joy from praising God.”

“We all are so grateful for being part of the ‘Living Stones’ experiment,” said Marta Kocon, from Poland, whose group gave tours of the Jesuit churches in Prague. “We were discovering the deep meanings of the art and sharing it with tourists. But the best was discovering some things in ourselves.”

“As I leave, I have learned more about myself and how I relate to God and to others than I have in most of my other retreat experiences combined,” said Christopher Dollesin, from the United States. “I was surrounded by a diverse group of people courageous enough to trust me and the others and be honest, brutally so at times, and that allowed me to feel very comfortable. Through the examples of others, I have learned that although I may not understand, pursuing God and God’s will, will never disappoint.”

In the midst of so much collaboration and sharing and companionship, there was also time for oneself and time to spend alone with God, as John Byrne, from the United States, indicated. “One of the biggest insights that I will take away with me from the experiment is the way in which I can use silence to help me to discover God and to realize that he alone is sufficient for my life,” he said. 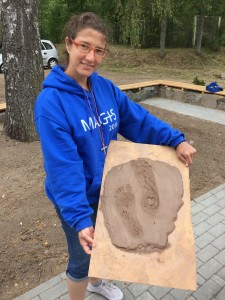 Nicholas Teo, from Singapore, was encouraged to renew his personal conversation with God and was blessed with “the desire to try and try again in my prayer life, to know that I am God’s child and He loves me, no matter what I do.”

Claire Dixon hoped to carry with her “the desire and longing to be amazed by the work of God” back to the United States. “God is constantly surprising us with new friendships, experiences and revelations,” she said. “However, very rarely do we take the time to step back and be amazed. That is when we recognize the glory and the greatness of our Lord.”

“I would ask anyone who reads this to attend MAGIS because the experiment is truly life-changing and a must-do for every Christian,” said Bardawil Bardawil, from Lebanon, voicing the deep sentiment and appreciation that countless MAGIS pilgrims now hold in their hearts. “These few days of sharing life, bread, passion, feelings and most importantly faith may — oh no, will — change your perception of things and the way you pray. Right now, looking back at all the experiment days, they may have had some tricky moments. But our hearts converted the music into the faith and the family we created. And now the hardest challenge is saying goodbye.”

Karl Gebrael, also from Lebanon, summed up what MAGIS has been about.

“‘MAGIS is our nation,’ said one of the participants during the MAGIS Circle, having been inspired by the sight of national communities filling the streets of Toruń, in Northern Poland, this morning,” Karl wrote. “MAGIS people live on the borders, as refugees do. It’s on the borders that conflicts can be solved, differences can be reconciled, and dialogue can take place. MAGIS people know well that the end is only a new beginning. Branches will grow from this experiment to embrace our families, friends, and all our entourage.”

“MAGIS people know that language is not the only communication medium,” Gebrael continued. “There also exists music, humor, and not surprisingly love. There will be no need to speak about MAGIS. Our eyes will tell the whole story.”