By the fourth day, pilgrims have become well-versed in the MAGIS Circle, small sharing groups within each experiment made up of the same members throughout the week.

“The MAGIS Circle helps us build a stronger community by sharing courageously in common fears, joys and questions,” says António Santos Lourenço, SJ, a Jesuit scholastic from Portugal. “More than interesting ideas or concepts, what has been most remarkable for each one of us is the growing openness to each other.”

Composed of five steps and based on the Ignatian examen, the MAGIS Circle begins with a moment of silence and reflection. Participants then speak about their perspectives of the day’s events through four rounds of discussion. They talk about their emotions, the connections they have made with that day’s scriptural theme, the life-giving elements that others shared, and one word that sums up their experience.

“Although we are only able to share translations, short phrases and smiles and expressions, I feel most connected to a woman from halfway around the world who speaks a completely different language than I,” says Emily Kesler, from the United States.

“Our experiment is called ‘One Family,’ and that’s just what we’re starting to be,” says María Barra Burillo, from Spain.

Angela Dimisca, from Romania, explains this concept further: “We can open up in front of the others and share our feelings, which makes us more confident.”

Corinne Sammut, from Malta, is on an experiment walking along the coast of Lithuania. “Upon reaching a fork in the road, Fr. Vitotas gathered acorns into an arrow indicating the way. It was a gesture showing that even when we think we’re walking alone, we are accompanied. When we reach crossroads in our life, there are always people to help us discern,” she says. 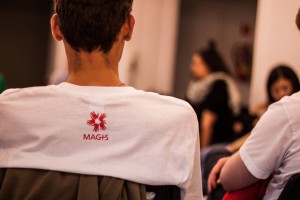 “The connection between us is born in moments of extreme sadness, just as it is found in moments of joy,” says Guillermo García-Ovies Pérez, from Spain, describing how pilgrims’ willingness to cry in front of each other has broken down barriers and united them profoundly.

The MAGIS Circle has become a highlight of the participants’ experience. “Initially, I dreaded the MAGIS Circle as I am a shy person who has a difficult time sharing about myself,” says John Byrne, from the United States. “Now, however, I have actually grown to look forward to it each day!”