On the second day of experiments, pilgrims further explored the great diversity of opinions and experiences among each other. “It is a struggle not to judge the others too quickly, not to follow prejudices, but to let them be who they are. It may turn out that, contrary to our first impression, we will receive something from them,” says Marta Kocon, from Poland.

“It’s easy to focus on the differences since we’re curious about other lifestyles,” says Claire Dixon, from the United States. But she was surprised that others shared similar experiences with their faith. “Some questions that have arisen in conversation were the same questions that I have been struggling to comprehend as well.” 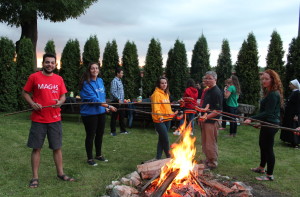 While language differences continue to provide challenges for the pilgrims in their diverse groups, some have unearthed a new appreciation for silence, like Jeff Sullivan. He is participating in an Ignatian film retreat during which periods of each day are in silence. “Instead of getting hung up on what we don’t understand in spoken word, we are unified in our prayer, the shared experience of watching a movie together, our generosity for one another, and shared desire to know God more intimately,” he says. “Silence has been a real gift to us and brought us closer than we could have imagined.”

Silence also plays a role in Christopher Dollesin’s experiment group, which is preparing a stage play that will be mainly pantomime-based, using a minimal number of words. “I was blown away. I have been able to experience so many different cultures in just 24 hours, and our members are all trying to learn different languages to better communicate with each other.”

Nicholas Teo is at the Jesuit novitiate experiencing the life of a young Jesuit in training. “What caught my attention today was sacrum silencium (sacred silence), which is practiced after evening prayer — restricting our usage of the Internet and socializing in preparation for the next day, allowing us to quiet our souls to better hear the voice of God. I thought about how it might be a challenge for myself to practice it after MAGIS and World Youth Day, as life would be so much more different than it is for me now in Poland.” 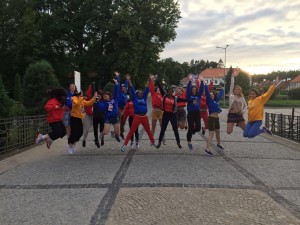 “The greatest surprise is how quickly in only one day our group has become a family,” says Haleema Mekani, whose experiment involves working at a vineyard. “Our sharing has deepened and we have transcended beyond language, culture and country. The only challenge I can see right now is having to separate at the end of our pilgrimage.”