July 24, 2016 — After six days of Ignatian experiments, pilgrims descended upon the city of Częstochowa in Poland, known for its shrine to Our Lady of Częstochowa, or the Black Madonna. Returning from Lithuania, Slovakia, the Czech Republic and locations across Poland in groups of around 25 pilgrims each, they were reluctant to leave the newfound intimacy of their experiments, but looking forward to reconvening and journeying on to World Youth Day together as well. The din of exhausted but happy pilgrims rose in a slow crescendo beginning early Saturday morning.

“I’ve had a lot of feelings about leaving the experiment and coming to Częstochowa. It’s been quite a transition,” said Erin Alberts, attending Seattle University. “I was living in a convent and having a prayerful experience and then I came here and everyone was dancing and singing and being loud. It was an interesting experience and transition.”

“The experiment was awesome. I think it was the best hiking experience I’ve ever had,” said Andrew Plaza, from the University of Scranton. His group spent the week in the Bieszczady Mountains near the Ukrainian border. “We lived in a pilgrim house and would go out every day and hike 23 kilometers and then come back, essentially nine hours. We got a lot of time to talk and get to know everyone, and come back and eat and sleep and basically repeat that for four days. It was simple living.”

The pilgrims unanimously agreed the experiments were among the most fulfilling and life-changing experiences they’d had — read more reflections from various groups on day one, two, three, four, five and six, as well as a special reflection by Daniel Everson, SJ, a Jesuit scholastic traveling with Loyola University Chicago. 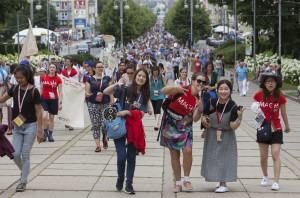 “The people I’ve met in my experiment have been a form of challenge for me, to encounter others from different countries, different beliefs and even different ideas,” said Molly Crawford, from Fordham University. “They have impacted me personally, to ask myself to look deeper at who I am and what I think. Coming back from the experiments, I definitely felt like I had a better sense of what being Catholic is about because I got to meet so many people from other countries and to see Catholicism through their eyes and their experience.”

Shortly after clambering off the buses and dropping off their belongings in the dorms, pilgrims immediately gathered in a nearby stadium for the Festival of Nations, a showcase of each delegation’s own cultural music and dance.

“The Festival of Nations was a great way to pull together everyone from all the different countries,” said Andrew. “I think South Korea was pretty fun. It was traditional and then it switched to modern,” he said, referring to the Koreans’ traditional dance which seamlessly cut to a performance of the pop hit “Gangnam Style.”

The next afternoon, participants made a pilgrimage to the Jasna Góra Monastery in the center of the city, for their last MAGIS Circle and a solemn reconciliation service, adoration and vigil with the famed 600-year old icon of the Black Madonna. 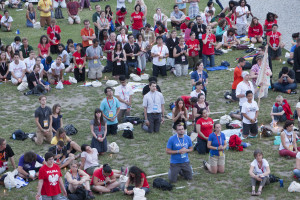 “For me the reconciliation service — the music and adoration — was really what I’ve been looking for so far,” Molly said. “It was particularly moving and a very calming and centering experience for myself. I think it made a nice end and capstone to the weekend, and gave me a lot of time to start putting my thoughts together about everything that’s happened so far.”

“I like that they emphasize reconciliation, because a lot of times I think that can be a forgotten aspect of the Catholic Church,” said Cailin Touseull, attending Saint Louis University.

After getting back late in the evening following the vigil with Mary, the pilgrims will be packing up and looking to the next step of their religious expedition: traveling to the deeply historical city of Kraków for World Youth Day.

“Everyone has made Poland our home away from home. I’m just really sad to be leaving MAGIS,” said Nadine Guyo, attending Seattle University. “I’m excited for Krakow and I know it’s going to be great, but I just hope we run into each other from our experiments at some point.”

There will certainly be opportunities for reconnection at World Youth Day, as the Polish Jesuits will be promoting and running three “MAGIS Cafes” for the pilgrims, venues in the middle of the city providing Jesuit-centered and Ignatian-inspired lectures, speakers, concerts and other programming. 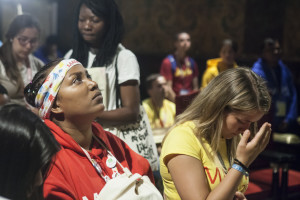 Pilgrims will be dispersed throughout Kraków, meaning they will definitely get a good sense of what the city is like as they travel back and forth to the World Youth Day events. “I’m really looking forward to exploring the city, because there’s so much history to it,” said Jake Blicharz, attending Loyola Marymount University. “I have Polish roots and I’ve never actually been there.”

And, of course, pilgrims are eagerly awaiting the chance to catch a glimpse of Pope Francis, the first Jesuit pope. “I’m really excited to go to World Youth Day and see the pope. I’m sure it will be like MAGIS times a thousand, so it’s a little nerve-wracking,” said Erin, referring to the expected crowd of two million people. “I’m obsessed with Pope Francis, he’s the best pope ever. I have a bracelet with his face on it. I’m really excited to see him.”