MAGIS is not a place removed from life’s fears and difficulties, as the pilgrims are well aware.

A number of pilgrims spoke about their anxieties surrounding the large and occasionally overwhelming number of people at MAGIS. “Oftentimes our fears get in the way of our ability to give ourselves to others,” says Winston Andres Zavala Alarcon, from Ecuador. Jeff Sullivan, from the United States, further elaborated: “I think that for me the biggest challenge coming in was settling into the opening ceremonies of MAGIS,” he explained. “Large gatherings can be difficult for introverts.” 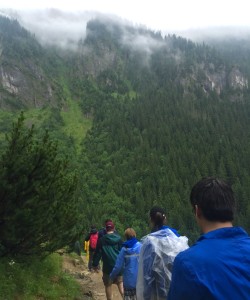 Undaunted, the pilgrims surmounted their obstacles to find hidden grace, expressing appreciation for the perspective that MAGIS has provided for their lives. “Many of us were afraid of silence. We live in a world that speaks to us without stopping,” says María Fernanda Hurtado, whose experiment group was sent to go on individual walks for an hour in silence. Though they were initially apprehensive, the pilgrims came to find the experience very fruitful.

Nadine Guyo discovered a realignment of priorities, which she worries may be challenging to maintain once she returns home. “MAGIS has given me a sense of purpose: to build my relationship with God and others. I am afraid I will lose sight of this when I go home to a fast-paced and distracted life,” she says.

“I think this is a good lesson in prioritizing and evaluating what activities are truly life-giving and will lead us to deeper, more intimate relationships with Christ,” says Maria Casey. “When I return home to Milwaukee, I will challenge myself to be self-aware in order to discern what I should devote my time to.”

Karl Gebrael, from Lebanon, described the other gifts of his time as a pilgrim. “Bonds are getting stronger and stronger,” he says. “It was in today’s MAGIS Circle that people started sharing their personal and familial stories from outside MAGIS. The walls of language, culture, race, and strangeness have fallen, for transparency and intimacy to take place.”

Bardawil Bardawil, also from Lebanon, adds, “Now, as the experiment is nearly ending, the biggest challenges are performing well at our concert, saying goodbye to people you became happy about seeing each day and sharing each step, each laugh, each tear — and, most importantly, each prayer.” 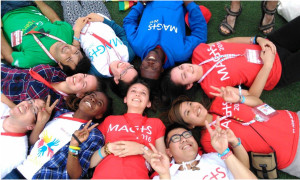 “That Holy Spirit can be tough,” says Cathy Dante, from the United States. “Our small group has found ourselves repeatedly challenged by the experiment — performing scenes, thinking about the future, eating new foods (tasty but new), and figuring out the washing machines. But through it all, we find ourselves responding and doing things we never thought possible, like preaching at Mass in another language, finally forgiving, or considering a vocation. Go, Holy Spirit!”

MAGIS has not been without its challenges, and participants have not been immune from fear. Nearing the end of the week, however, many of those difficulties have disappeared.

“I know that God has everything in his hands,” says Silvia Ťapáková, from Slovakia. “There isn’t any reason to fear.”