Technology and Dance for the Greater Glory of God

The following experiment snapshots are from Dan Everson, S.J., a participant from the USA.

During the opening weekend, where English was the official language for huge ceremonies involving thousands of people, it was easy to feel like I could communicate with everyone around me. But here, in the smaller community of our experiment, I have often attempted a conversation and failed. 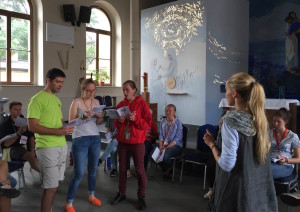 One member of my Magis Circle speaks hardly any English, which meant he could hardly share anything with us, except that his experience was positive. But today he spoke through Google Translate, an amazing piece of technology that helped us to understand his internal experience.

It’s not perfect; Google told us that our friend was engaged in his “favorite business” here in Łódź, that is, singing and dancing! But it is good enough to help us connect with him at a much deeper level than was previously possible.

As our Magis Circle leader puts it, we are using technology for the greater glory of God.

My experiment group has joined Mocni w Duchu, the “Strong in the Spirit” choir that so passionately led us in worship during the opening festivities in Łódź.

While I am on the “singing” experiment, there is still plenty of dancing — or at least hand motions! I must admit that I was reluctant to engage in the hand motions when Strong in the Spirit took the stage on Friday night. The band won me over quickly, and I soon danced with everyone else, which was fun! But with each new day, as we begin to sing and dance, I have to overcome my hesitations once more. 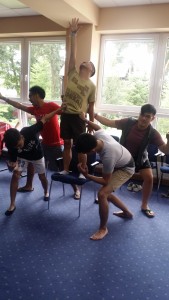 For some reason, I have always felt embarrassed about dancing. But during Magis, I have seen so many people dance beautifully — not just the members of Mocni w Duchu but also groups from Hungary, Zimbabwe, and various other nations. I see a freedom in their dance, a freedom to express themselves through their bodies, a freedom I suppose I don’t really have.

I have also begun to notice how dancing is a universal language that transcends differences of vocabulary and grammar. Students from Russia or Haiti may not understand the words when we sing in English, but when we perform the hand motions together, we all pray in unison anyway.

I would not have expected a “singing” experiment to teach me about body language, but as our conductor Magda often points out, better posture helps us make a more joyful noise to the Lord.