July 15, 2016 — A total of 2,200 pilgrims have arrived in Poland’s third-largest city of Łódź for the opening of MAGIS 2016, a program of service and faith-sharing approximately a week and a half preceding World Youth Day.

Delegations arrived throughout the day on July 14 and 15 to cheers, a welcome bag with MAGIS swag, and dormitory room assignments. Many were grateful to reach Poland after long multi-flight journeys and red-eye flights.

Ray Che, traveling with the delegation from Santa Clara University in Santa Clara, California, was one such pilgrim. “My trip over here was pretty good — nine hours to Amsterdam and then two hours from Amsterdam to here,” he said. “I got about three hours of sleep.” Regardless, Che said he was “doing pretty well and really excited for MAGIS.” 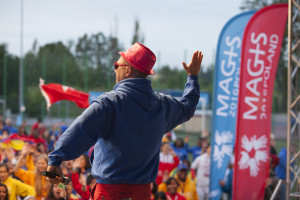 “It was wonderful. We enjoyed it and we felt that the Jesuit community, the Jesuit family is here. There was a spirit of magis in everybody and it was a good start,” said Jesuit scholastic Vasanthakumar Irudayaraj, from India.

“I was very happy and it was amazing,” added Jesuit scholastic Mark Richard Pereira, also from India. “I’ve never seen an opening ceremony like this and it was very alive. It gave a very good kickoff for MAGIS, I believe.”

There was dancing, singing, icebreakers and plenty of patriotism from each country represented. Paweł Borkowski, a former Jesuit, led a dance party and icebreakers.

“It pumps you up and gets all your energy out at the beginning,” said Victoria Landa-Steinau, a student at Loyola University Chicago. “I think it bonded us a lot. I didn’t realize there would be so many nationalities here and I’m excited to get to meet all these people and see how they view their religion and see what the cultural differences are between all the different countries.”

“The opening ceremony was proof that love, song and dance are universal languages,” said Adam Roberts, also attending Loyola University Chicago. “We’ve all come from different corners of the globe to celebrate for different reasons and it was a great way to start our celebration with so many different people.”

Jesuit Father Tomasz Kot, assistant to Jesuit Father Adolfo Nicolás, Superior General of the Society of Jesus, made the announcement that the Father General would not be able to attend MAGIS as previously scheduled due to a health issue.

“He will not be with us physically, but he will be spiritually with us,” Fr. Kot said. Pilgrims will view a video message from Fr. Nicolás instead and will be able to participate in a Q&A session with Fr. Kot on the Father General’s behalf.

Participants closed the event with a solemn evening prayer service and Ignatian examen.

Pilgrims will stay at the University of Łódź, before continuing on to “Ignatian experiments” (activities related to the life experiences of St. Ignatius Loyola, founder of the Jesuits) across Slovakia, Lithuania, Poland and the Czech Republic. They will finally regroup in Częstochowa, Poland, to make a pilgrimage to the shrine of the Black Madonna, Our Lady at Czestochowa and to share and reflect on their experiments.

“It’s a great pleasure to see all these people arriving from all over the world to Poland to take part in MAGIS,” said Polish Jesuit Father Waldemar Los, general program coordinator for MAGIS 2016. “I am happy about that. The atmosphere is really great and our hearts grow seeing all these people coming here.”